A PromiseWorker is a ChromeWorker except instead of calling postMessage() to send a message, you call post(), which returns a Promise. JavaScript files imported into the worker scope and main thread scope which allows posting to the worker and receiving in the form of a promise. Like ChromeWorker objects, PromiseWorker is mostly used for js-ctypes but it is not limited to that. There is no XPCOM access, similar to ChromeWorker. This answers the question "When should I use a PromiseWorker?", and the answer is, whenever you would normally use a ChromeWorker, but want postMessage to return promises.

The PromiseWorker object is used to deliver all of the OS.File functionality to the main thread. Here is the test case from Firefox codebase: Mozilla DXR :: test_Promise.js.

A JavaScript code module used by the main thread to create a worker thread and communicate with it. PromiseWorker.jsm provides BasePromiseWorker. 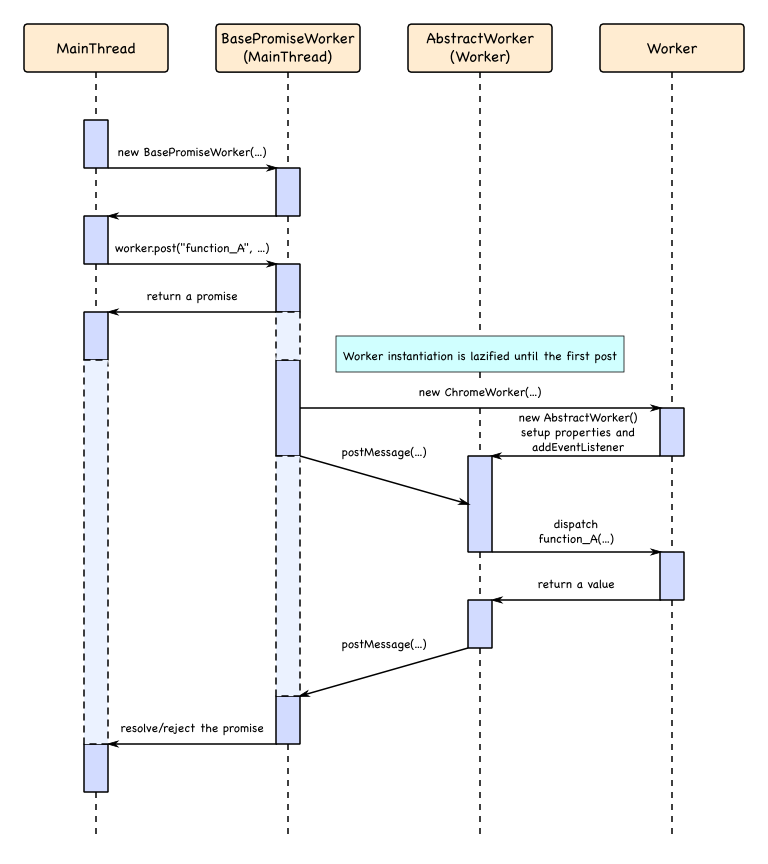 This section explains how to set up and use a PromiseWorker. As well known with workers, there is a minimum of two files required. The worker file, and the main thread file. The following sections tell you which content to use in your worker and main thread files, in order to use PromiseWorker objects.

There is some standard templating that must be dropped into the worker file by the developer. The require.js file must be imported with WorkerGlobalScope/importScripts(). Next, the PromiseWorker.js file should be brought in with the require() method. Finally, the template code should be added in. The code below is what should be copied and pasted:

AbstractWorker is a base class for the worker, and it's designed to be used by derived class, which provides above four methods (dispatch, postMessage, close, and log). but you can instantiate AbstractWorker itself and set its properties later, instead of creating derived class.

The BasePromiseWorker object needs to be imported:

Sending a message from main thread

To send a message to a worker from the main thread, one normally uses postMessage(). For PromiseWorker objects, however, you can't do that. Instead, use the post() method, as seen below.

aFunctionName
The name of the function to be called as it appears in the worker file.
aArgs

By convention, the last argument may be an object options with some of the following fields:

outExecutionDuration
{number|null} A parameter to be filled with the duration of the off main thread execution for this call.

aClosure Optional
An object holding strong references to value that should not be garbage-collected before the reply has been received.
aTransferList Optional
An optional array of Transferable objects to transfer ownership of. If the ownership of an object is transferred, it becomes unusable (neutered) in the context it was sent from, and it becomes available only to the worker it was sent to.
Only MessagePort and ArrayBuffer objects can be transferred. To learn more on how to achieve this see the section in this article titled Transferring special data from main thread to worker.

The regular rules of workers apply; special data of MessagePort and ArrayBuffer objects can be transferred as of Firefox 40. There are two ways to transfer data. The first is with aTransferList argument and other with BasePromiseWorker.Meta. Both are done by the post function described above.

To transfer an ArrayBuffer object, pass an array containing it as aTransferList argument.

This is simpler if the you know what to transfer at the callsite.

Above code can also be done with the Meta object. Each special data argument that you want to transfer, you can wrap in a BasePromiseWorker.Meta object. The above example can be rewritten like this:

This is convenient if the function's arguments are generated by some other functions or passed from somewhere else. post callsite doesn't have to know which object should be transferred. For example:

foo now has the power to determine if the argument should be transferred by returning a Meta instance. So it can transfer an object without modifying the caller.

Here is a simple demo showing how to transfer the second argument to a worker: Github:: PromiseWorker Transfer Data Line 23. The command outline below this shows how to do the same with Meta syntax.

Sending a message from worker

With all other workers, to send a message to the main thread, postMessage is typically used. However with PromiseWorker objects this is no longer the case, simply return data or throw from your function depending if you want to resolve or reject the promise. In summary, from a worker file, data can only be sent back as a response to a request from the main thread, it is not possible for a worker to send data to the main thread otherwise, this is a key difference between PromiseWorker worker file and all other types of workers.

To resolve the promise from the worker, simply return anything from the worker scope, and the main thread promise will be resolved with the returned value.

This example shows how to transfer a single value, which is an ArrayBuffer.

If you want to return an object or an array and transfer only certain parts of this data, it would all have to be return wrapped in this Meta object like so:

A simple demo showing this in live action can be found here: Github :: PromiseWorker Transfer ArrayBuffer - Worker Side

To reject the promise from the worker, simply throw. Various error objects are supported; each one has its specific meaning; they're described below.

You can also construct and throw your own custom error objects as needed. When custom error is caught by AbstractWorker, toMsg method will be called to convert it into message. The toMsg function should return an object which has exn property, that is the property key for the fromMsg function in main thread side.

The converted message will be posted back to the main thread, and it will be converted again to error object, with fromMsg function specified for the error in ExceptionHandlers property. This is seen in a simple demo GitHub :: PromiseWorker Custom Errors Demo - Main Thread Setup.

This is seen in a simple demo at GitHub :: PromiseWorker Custom Errors Demo - Worker Side Setup.

Running the code above will log the following information to the console: