The purpose of this article is to provide a high-level technical overview of the architecture of the extensible, object-based Mozilla application framework. It examines what happens when the user performs a simple user interface (UI) action such as clicking a link in the Contents Panel of the Help Viewer window shown below. 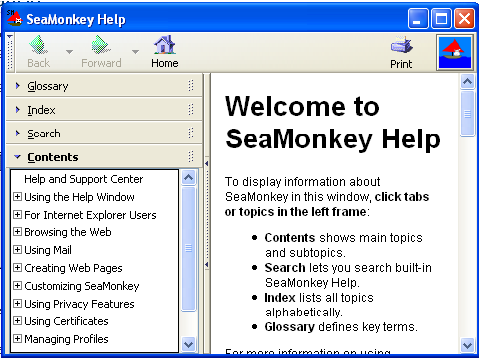 This article assumes you have access to Mozilla sources and are familiar with the directory structure of the source tree. The code samples in the article are based on Mozilla/5.0 (Windows; U; Windows NT 5.1; en-US; rv:1.9a1) Gecko/20051104 SeaMonkey/1.1a from a new source tree checked out 11/04/05. The build ID is 2005110409. TheHelp Viewer files referenced in the article are located in

This article first covers some conceptual groundwork, then walks through a user scenario to illustrate how key Mozilla architectural components work together to support a simpleHelp Viewer UI action.

At a high level, you can think of the Mozilla framework as consisting of a suite of applications, each of which is organized into three basic layers depicted in Figure 1. 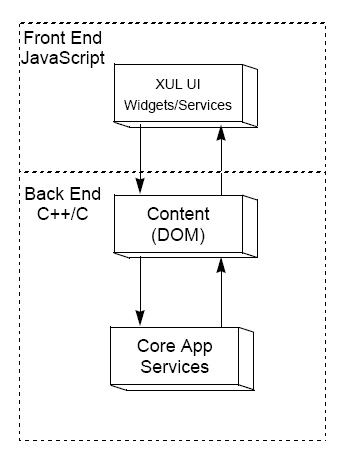 The X Window System Toolkit defines the termwidget as a pre-defined object that encapsulates both the command actions and data associated with a graphical user interface (GUI) control. The various X Toolkit implementations provide a set of widgets for UI controls such as menus, command buttons, dialog boxes and scroll bars. The Mozilla XPToolkit module provides a similar set of facilities for building cross-platform UI controls implemented as XML User Interface Language (XUL) packages. A XUL package consists of

A package (also known as chrome) is really just a bundling of a set of UI widgets and associated services implementing a particular application feature. Chrome and Extensions are examples of packages.

The Mozilla Document Object Model (DOM) specifies a logical tree structure for storing UI and document content, and provides an API (Application Programming Interface) for accessing and manipulating the content. An application such as the browser may have one or more open documents accessible via DOM APIs. When an HTML, XML, SVG or other type of document is loaded, the NGLayout engine (also known as Gecko) parses the contents into a DOM tree, and handles the layout and rendering of the document pages. The NGLayout engine also parses XUL UI controls into a DOM tree and handles rendering of the UI.

Core application modules are implemented as a set of one or more XPCOM (Cross-Platform COM) objects.

Before getting into the details of the UI example, it's helpful to have a basic understanding of the XPCOM object model. Mozilla architectural modules are comprised of groups of related XPCOM objects that provide services to and access services from each other through dynamically queryable interfaces.

Object Model At a Glance

Mozilla dynamically loads and integrates core modules and XUL packages into the runtime environment on startup. Once loaded, a module or package has full access to the XPCOM objects of all the other modules in the runtime environment. The ability to dynamically integrate modules and packages at startup is a powerful benefit of the object model, which defines a module as a set of one or more XPCOM objects calledcomponents. These objects provide services to client packages and modules and access services provided by other modules through dynamically queryable interfaces. Figure 2 shows this structure. 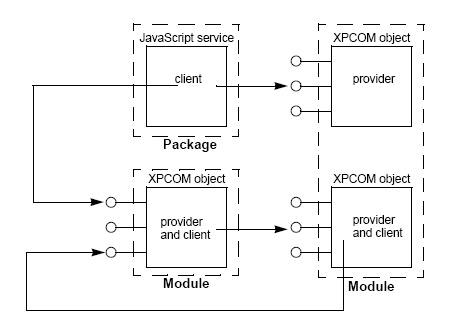 In the diagram above, each horizontal line extending from an object and terminated by an open circle indicates an interface to the object. The client object does not need to know anything about the internal structure or implementation of the provider object in order to take advantage of its services. The client simply queries the provider for a particular service, and if available, accesses that service through an interface defined in XPIDL (Cross-Platform IDL), derived from the CORBA IDL. The XPIDL interface description is independent of the programming language used to implement the object itself. For example, a JavaScript object or C++ class could both implement the same XPIDL interface.

Let’s consider a Resource Description Framework (RDF) example, where RDF is a framework for describing and interchangingmetadata, that is, information about information. In this example, we’re interested in the RDF sub-graph underlying theContents Panel widget within theHelp Viewer window. Suppose the client already has an nsIRDFDataSource object representing a sub-graph of an RDF graph and calls nsIRDFDataSource.GetTarget(resource, NC_LINK, true) to obtain an nsIRDFNode representing a specific node in the graph, in this case a link to aHelp Viewer document page. The client is completely unaware of which C++ class (or other language) actually implements nsIRDFNode; it only interacts with the IDL interface.

The uuid parameter to QueryInterface() is the IID uniqely identifying the interface.

If nsIRDFNode doesn't support nsIRDFLiteral, it returns null and it's up to the client to choose an alternate course of action.

The XPCOM component keeps track of all interface pointers currently held by its clients using an internal reference count it increments via client calls to AddRef(). It is up to the client to call Release() when it no longer needs the interface. Release() decrements the reference count and then the object becomes a candidate for destruction.

JavaScript handles its own garbage collection, so it doesn’t need to call AddRef() and Release().

Inside an XPCOM Component

Figure 3 shows a more detailed view of an XPCOM component. 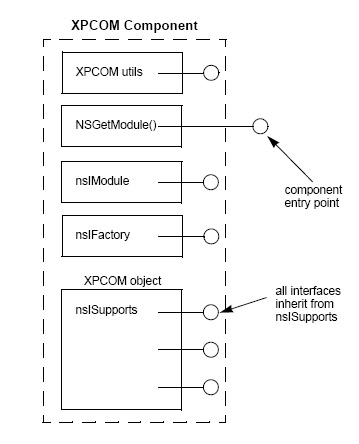 XPCOM components also link with a set of XPCOM utilities, such as strings, smart pointers, basic assertion and condition checking. These utilities are referred to as XPCOM glue.

To summarize, the XPCOM object model

Help.js declares an nsIRDFService as a compile time constant at the beginning of the file.

The Components object is made available to JavaScript via XPConnect; it serves as a bridge connecting JavaScript and XPCOM.

Now that getLink() has the nsIRDFNode for the link, it can call QueryInterface() to check whether the nsIRDFLiteral is supported.

If nsIRDFLiteral is supported, getLink() uses it to return the value of the link. Otherwise it returns null.

The document page for the link is displayed in theHelp Viewer window.