The Mozilla project runs a symbol server for trunk Firefox nightly and release builds on Windows. Symbols are available for at least 30 previous days worth of nightly builds, and Firefox releases from 2.0.0.4. This allows debugging of those builds without forcing all users to download large debugging files. The server functions like Microsoft's symbol server so the documentation there can be useful.

Note that because Mozilla release builds are heavily optimized, debugging is not always easy. The debugger will not be able to show you the content of all variables and the execution path can seem strange because of inlining, tail calls, and other compiler optimizations. The only workaround is to build an unoptimized local build.

The official symbol server URL for Firefox is https://symbols.mozilla.org/. You cannot visit this URL directly: you must add it to the symbol path of your debugging tool. In the examples below, a local cache directory is used to avoid repeatedly fetching the PDB from the server. Replace C:\Users\bsmedberg\symbols with an appropriate cache directory on your machine. 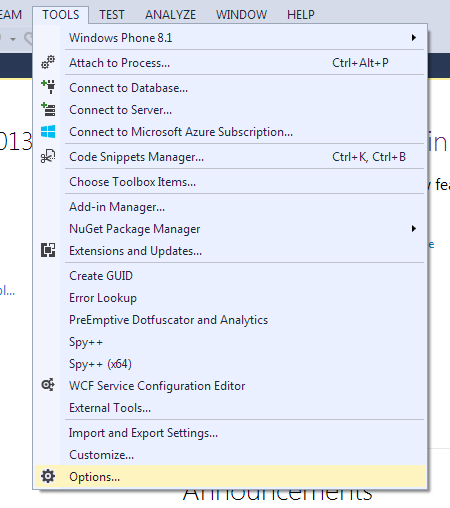 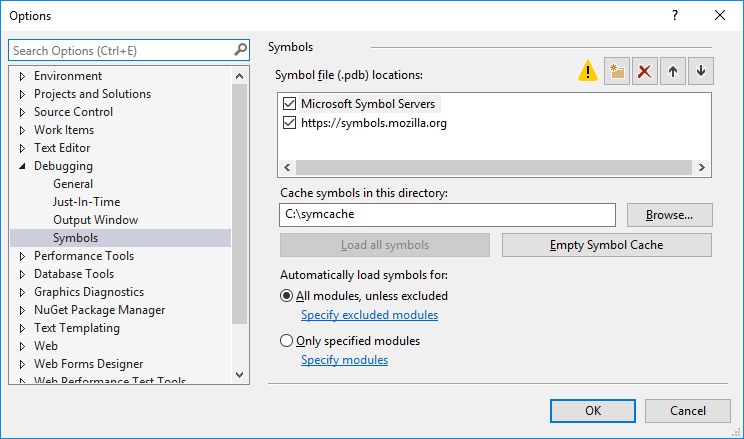 Using the symbol server in Windbg

The Windbg symbol path is configured with a string value delimited with asterisk characters. To use only the Mozilla symbol server, add the following entry to your symbol path (note: you can replace c:\symcache\ with any writable directory on your computer, if you'd prefer a different location for downloaded symbols):

Set this string as _NT_SYMBOL_PATH in the environment, using the Windbg menus, or by typing the .sympath command. If you would like to get symbols from Microsoft's symbol server as well, you should list that first (note: you can replace c:\symcache\ with any writable directory on your computer, if you'd prefer a different location for downloaded symbols): 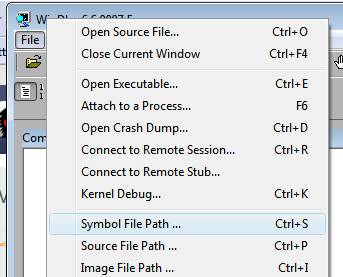 You can also download the symbols using symchk.exe, part of Microsoft's Debugging Tools for Windows. The command should look like this (again, you can replace c:\symcache\ with any writable directory on your computer, if you'd prefer a different location for downloaded symbols):

Note the \* after the Mozilla directory. The output of this command should be similar to:

If you are on Linux and running GDB 7.9 or newer, you can use this GDB Python script to automatically fetch symbols. You will need to source this script before loading symbols (the part where it spends a few seconds loading each .so when you attach gdb). If you want to reload symbols, you can try:

On older GDB and Mac OS X there is a Python script to download symbols from the Mozilla symbol server for gdb, Shark and other software that uses symbols. Note that the symbol file for the XUL library is very large and takes some time to download. This may make it appear as if the script has gotten stuck, but it will continue.

Symbol indices are named like so: symbols.mozilla.org/{lowercased:Name}/{lowercased:Name}-{Version}-{Platform}-{BuildID}-symbols.txt. The Platform is either 'Darwin' (for Mac) or 'Linux'. The rest of values are based on the contents of the application.ini file under the [App] heading: For example, the Thunderbird 3.1b2 release with Name=Thunderbird, Version=3.1b2, BuildID=20100430125415 would have a filename of "thunderbird-3.1b2-Linux-20100430125415-symbols.txt" under the thunderbird directory at symbols.mozilla.org. Its contents are a list of paths to files, all relative to the directory the BLAH-symbols.txt file is found in.

In addition to symbols, Mozilla also has a source server, letting you do source-level debugging and inspection on demand.