This is an experimental technology
Check the Browser compatibility table carefully before using this in production.

The Reporting API provides a generic reporting mechanism for web applications to use to make reports available based on various platform features (for example Content Security Policy, Feature-Policy, or feature deprecation reports) in a consistent manner.

There are a number of different features and problems on the web platform that generate information useful to web developers when they are trying to fix bugs or improve their websites in other ways. Such information can include:

The Reporting API's purpose is to provide a consistent reporting mechanism that can be used to make such information available to developers in the form of reports represented by JavaScript objects. There are a few ways to use it, which are detailed in the sections below.

Each unique origin you want to retrieve reports for can be given a series of endpoints, which are URLs that can receive given reports from a user agent.

The Report-To HTTP header is used to specify details about the different endpoints that a user-agent has available to it for delivering reports to. You can then retrieve reports by making a request to those URLs.

The endpoints are arranged into groups; an endpoint group can work together to provide load balancing (each endpoint will receive a specified proportion of report traffic) and safeguarding against failure (fallback endpoints can be specified to use if the primary ones fail).

Note: There is no absolute guarantee of report delivery — a report could still fail to be collected if a serious error occurs.

Reports sent to endpoints can be retrieved independently of the running of the websites they relate to, which is useful — a crash for example could bring down a web site and stop anything running, but a report could still be obtained to give the developer some clues as to why it happened.

Reports can also be obtained via ReportingObserver objects created via JavaScript inside the website you are aiming to get reports on. This method is not as failsafe as the Report-To method described above — any page crash could stop you retrieving the reports — but it is easier to set up, and more flexible.

ReportingObserver
Create ReportingObserver instances using its constructor, which can then be used to collect and access reports.
Report
An object representing a single report.

ReportingObserverOptions
Allows options to be set in the constructor when creating a reporting observer.

In our deprecation_report.html example, we create a simple reporting observer to observe usage of deprecated features on our web page:

We then tell it to start observing reports using ReportingObserver.observe(); this tells the observer to start collecting reports in its report queue, and runs the callback function specified inside the constructor:

Later on in the example we deliberately use the deprecated version of MediaDevices.getUserMedia():

This causes a deprecation report to be generated; because of the event handler we set up inside the ReportingObserver() constructor, we can now click the button to display the report details. 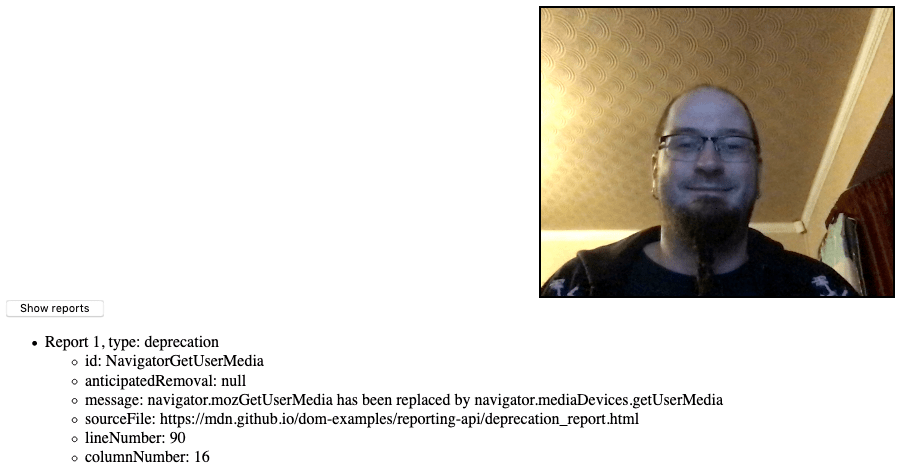 Note: If you look at the complete source code, you'll notice that we actually call the deprecated getUserMedia() method twice. After the first time we call ReportingObserver.takeRecords(), which returns the first generated report and empties the queue. Because of this, when the button is pressed only the second report is listed.

Support is at an early stage right now. Firefox supports the JavaScript API and the Report-To header behind prefs: