View Source lets you look at the HTML or XML source for the page you're viewing. To activate View Source:

The command opens a new tab with the source for the current page.

View Source has three additional features, which can be accessed from the context menu in the View Source tab: 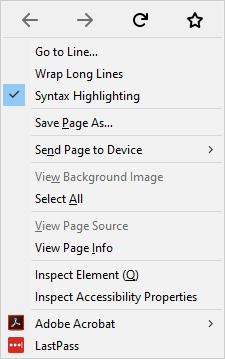 Go to Line
Scrolls to the specified line. If the number is higher than the lines in a file, you receive an error message.
Wrap Long Lines (toggle)
Wraps long lines to the width of the page.
Syntax Highlighting (toggle)
Applies syntax highlighting to the code.When syntax highlighting is on, View Source also highlights parsing errors in red. Hovering your mouse over errors displays a tooltip explaining the error.

This feature is useful when you're looking for HTML errors.

To access Go to Line from the keyboard, press Control + Option + L on macOS, or Alt + Shift + L on Windows or Linux.

Link to a line number

It is possible to link to a particular line, by adding the #lineNNN anchor to the url the browser will jump to the NNN line.

If you select part of a web page and conext-click, you'll see a context menu item labeled "View Selection Source", that behaves just like "View Page Source", except you only see the source for the selection.

If you context-click while the mouse is over some MathML, you'll see a context menu item labeled "View MathML Source": click it to see the MathML source.

There are limitations to what View Source does for you that you need to be aware of.

View Source only reports parsing errors, not HTML validity errors. For example, putting a <div> element as a child of a <ul> element isn't a parse error, but it is not valid HTML. Therefore, this error will not be flagged in View Source. If you want to check that HTML is valid, you should use an HTML validator, such as the one offered by W3C.

Not all parse errors are reported

This mishighlighting can be seen by viewing the source of Firefox chrome files (such as XUL documents). However, this shouldn't be a problem in practice when viewing typical XML files.