The HTMLElement.offsetHeight read-only property returns the height of an element, including vertical padding and borders, as an integer.

Typically, offsetHeight is a measurement in pixels of the element's CSS height, including any borders, padding, and horizontal scrollbars (if rendered). It does not include the height of pseudo-elements such as ::before or ::after. For the document body object, the measurement includes total linear content height instead of the element's CSS height. Floated elements extending below other linear content are ignored.

If the element is hidden (for example, by setting style.display on the element or one of its ancestors to "none"), then 0 is returned.

This property will round the value to an integer. If you need a fractional value, use element.getBoundingClientRect(). 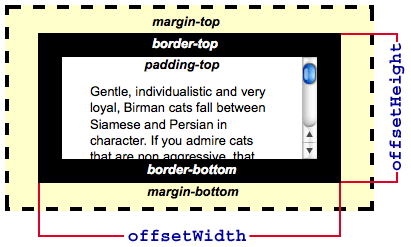 offsetHeight is a property of the DHTML object model which was first introduced by MSIE. It is sometimes referred to as an element's physical/graphical dimensions, or an element's border-box height.