The linear-gradient() CSS function creates an image consisting of a progressive transition between two or more colors along a straight line. Its result is an object of the <gradient> data type, which is a special kind of <image>.

<side-or-corner>
The position of the gradient line's starting point. If specified, it consists of the word to and up to two keywords: one indicates the horizontal side (left or right), and the other the vertical side (top or bottom). The order of the side keywords does not matter. If unspecified, it defaults to to bottom.
The values to top, to bottom, to left, and to right are equivalent to the angles 0deg, 180deg, 270deg, and 90deg, respectively. The other values are translated into an angle.
<angle>
The gradient line's angle of direction. A value of 0deg is equivalent to to top; increasing values rotate clockwise from there.
<linear-color-stop>
A color-stop's <color> value, followed by one or two optional stop positions, (each being either a <percentage> or a <length> along the gradient's axis).
<color-hint>
The color-hint is an interpolation hint defining how the gradient progresses between adjacent color stops. The length defines at which point between two color stops the gradient color should reach the midpoint of the color transition. If omitted, the midpoint of the color transition is the midpoint between two color stops.

As with any gradient, a linear gradient has no intrinsic dimensions; i.e., it has no natural or preferred size, nor a preferred ratio. Its concrete size will match the size of the element it applies to.

To create a linear gradient that repeats so as to fill its container, use the repeating-linear-gradient() function instead.

Because <gradient>s belong to the <image> data type, they can only be used where <image>s can be used. For this reason, linear-gradient() won't work on background-color and other properties that use the <color> data type.

Composition of a linear gradient

A linear gradient is defined by an axis—the gradient line—and two or more color-stop points. Each point on the axis is a distinct color; to create a smooth gradient, the linear-gradient() function draws a series of colored lines perpendicular to the gradient line, each one matching the color of the point where it intersects the gradient line. 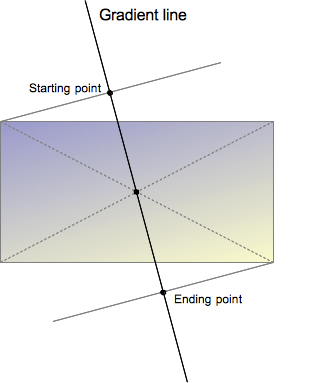 The gradient line is defined by the center of the box containing the gradient image and by an angle. The colors of the gradient are determined by two or more points: the starting point, the ending point, and, in between, optional color-stop points.

The starting point is the location on the gradient line where the first color begins. The ending point is the point where the last color ends. Each of these two points is defined by the intersection of the gradient line with a perpendicular line passing from the box corner which is in the same quadrant. The ending point can be simply understood as the symmetrical point of the starting point. These somewhat complex definitions lead to an interesting effect sometimes called magic corners: the corners nearest to the starting and ending points have the same color as their respective starting or ending points.

By adding more color-stop points on the gradient line, you can create a highly customized transition between multiple colors. A color-stop's position can be explicitly defined by using a <length> or a <percentage>. If you don't specify the location of a color, it is placed halfway between the one that precedes it and the one that follows it. The following two gradients are equivalent.

If two or more color stops are at the same location, the transition will be a hard line between the first and last colors declared at that location.

Color stops should be listed in ascending order. Subsequent color stops of lower value will override the value of the previous color stop creating a hard transition. The following changes from red to yellow at the 30% mark, and then transitions from yellow to blue over 35% of the gradient

Multi-position color stop are allowed. A color can be declared as two adjacent color stops by including both positions in the CSS declaration. The following three gradients are equivalent:

By default, if there is no color with a 0% stop, the first color declared will be at that point. Similarly, the last color will continue to the 100% mark, or be at the 100% mark if no length has been declared on that last stop.

Gradient at a 45-degree angle

Gradient that starts at 60% of the gradient line