The Waterfall gives you insight into the sorts of things the browser is doing as it runs your site or app. It's based on the idea that the things a browser does when running a site can be divided into various types - running JavaScript, updating layout, and so on - and that at any given point in time, the browser is doing one of those things.

So if you see a sign of a performance problem - a drop in the frame rate, for example - you can go to the Waterfall to see what the browser was doing at that point in the recording. 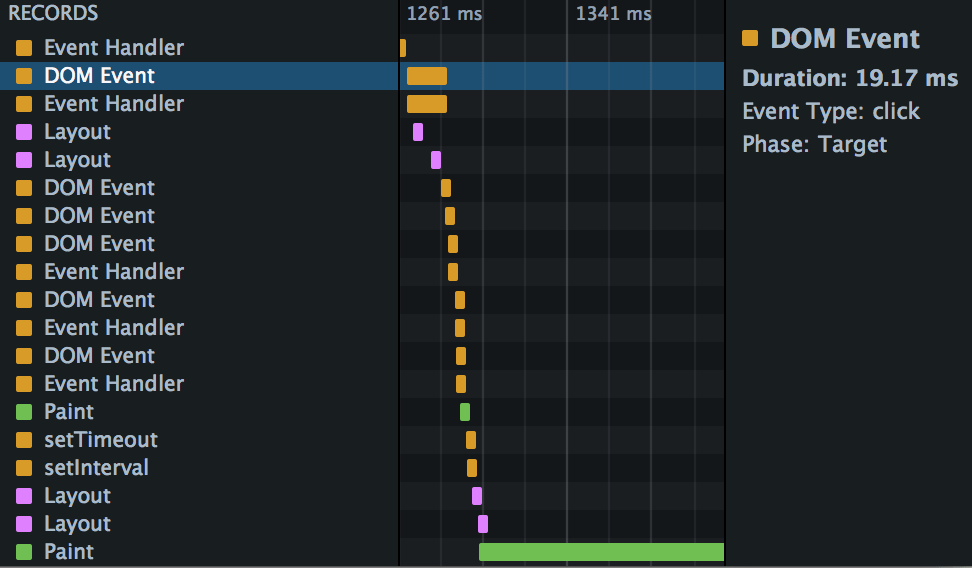 Along the X-axis is time. Recorded operations, called markers, are shown as horizontal bars, laid out in a waterfall to reflect the serial nature of the browser's execution.

You can control which markers are displayed using a button in the Toolbar:

One pattern that you'll often see in the Waterfall view is something like this:

This is a visualization of the basic algorithm the browser uses to update the page in response to some event:

This sequence needs to fit into a single frame, since the screen isn't updated until it is complete. It's commonly accepted that 60 frames per second is the rate at which animations will appear smooth. For a rate of 60 frames per second, that gives the browser 16.7 milliseconds to execute the complete flow.

Importantly for responsiveness, the browser doesn't always have to go through every step:

By default, a site's JavaScript is executed in the same thread that the browser uses for layout updates, repaints, DOM events, and so on. This means that long-running JavaScript functions can cause unresponsiveness (jank): animations may not be smooth, or the site might even freeze.

Using the frame rate tool and the Waterfall together, it's easy to see when long-running JavaScript is causing responsiveness problems. In the screenshot below, we've zoomed in on a JS function that's caused a drop in the frame rate:

The Intensive JavaScript article shows how the Waterfall can highlight responsiveness problems caused by long JavaScript functions, and how you can use asynchronous methods to keep the main thread responsive.

Some paint effects, such as box-shadow, can be expensive, especially if you are applying them in a transition where the browser has to calculate them in every frame. If you're seeing drops in the frame rate, especially during graphically-intensive operations and transitions, check the Waterfall for long green markers.

Red markers in the Waterfall represent garbage collection (GC) events, in which SpiderMonkey (the JavaScript engine in Firefox) walks the heap looking for memory that's no longer reachable and subsequently releasing it. GC is relevant to performance because while it's running the JavaScript engine must be paused, so your program is suspended and will be completely unresponsive.

To help reduce the length of pauses, SpiderMonkey implements incremental GC: this means that it can perform garbage collection in fairly small increments, letting the program run in between. Sometimes, though, it needs to perform a full non-incremental collection, and the program has to wait for it to finish.

In trying to avoid GC events, and especially non-incremental GC events, it's wise not to try to optimize for the specific implementation of the JavaScript engine. SpiderMonkey uses a complex set of heuristics to determine when GC is needed, and when non-incremental GC in particular is needed. In general, though:

When the Waterfall records a GC marker it indicates:

Adding markers with the console API

These enable you to mark a specific section of the recording.

To make a console marker, call console.time() at the start of the section, and console.timeEnd() at the end. These functions take an argument which is used to name the section.

The marker is labeled with the argument you passed to console.time(), and when you select the marker, you can see the program stack in the right-hand sidebar.

Starting in Firefox 41, the right-hand sidebar will also show the stack at the end of the period: that is, at the point console.timeEnd() was called. If console.timeEnd() was called from the resolution of a Promise, it will also display "(Async: Promise)", under which it will show the "async stack": that is, the call stack at the point the promise was made.

The Waterfall will display a marker for the period between time() and timeEnd(), and if you select it, you'll see the async stack in the sidebar: 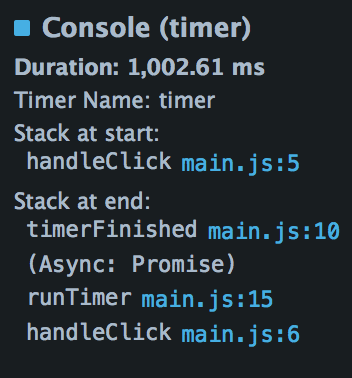 Timestamps enable you to mark an instant in the recording.

To make a timestamp marker, call console.timeStamp(). You can pass an argument to label the timestamp.

For example, suppose we adapt the code above to make a timestamp every 10 iterations of the loop, labeled with the iteration number:

In the Waterfall you'll now see something like this: