Deprecated
This feature is no longer recommended. Though some browsers might still support it, it may have already been removed from the relevant web standards, may be in the process of being dropped, or may only be kept for compatibility purposes. Avoid using it, and update existing code if possible; see the compatibility table at the bottom of this page to guide your decision. Be aware that this feature may cease to work at any time.

The HTML <content> element—an obsolete part of the Web Components suite of technologies—was used inside of Shadow DOM as an insertion point, and wasn't meant to be used in ordinary HTML. It has now been replaced by the <slot> element, which creates a point in the DOM at which a shadow DOM can be inserted.

This element includes the global attributes.

select
A comma-separated list of selectors. These have the same syntax as CSS selectors. They select the content to insert in place of the <content> element.

Here is a simple example of using the <content> element. It is an HTML file with everything needed in it.

If you display this in a web browser it should look like the following. 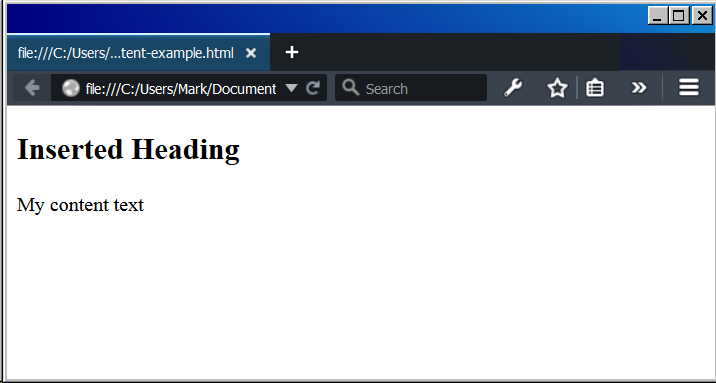 This element is no longer defined by any specifications.