Another essential concept in coding is functions, which allow you to store a piece of code that does a single task inside a defined block, and then call that code whenever you need it using a single short command — rather than having to type out the same code multiple times. In this article we'll explore fundamental concepts behind functions such as basic syntax, how to invoke and define them, scope, and parameters.

Where do I find functions?

In JavaScript, you'll find functions everywhere. In fact, we've been using functions all the way through the course so far; we've just not been talking about them very much. Now is the time, however, for us to start talking about functions explicitly, and really exploring their syntax.

Pretty much anytime you make use of a JavaScript structure that features a pair of parentheses — () — and you're not using a common built-in language structure like a for loop, while or do...while loop, or if...else statement, you are making use of a function.

We've made use of functions built in to the browser a lot in this course. Every time we manipulated a text string, for example:

Or every time we manipulated an array:

Or every time we generated a random number:

...we were using a function!

Note: Feel free to enter these lines into your browser's JavaScript console to re-familiarize yourself with their functionality, if needed.

The JavaScript language has many built-in functions to allow you to do useful things without having to write all that code yourself. In fact, some of the code you are calling when you invoke (a fancy word for run, or execute) a built in browser function couldn't be written in JavaScript — many of these functions are calling parts of the background browser code, which is written largely in low-level system languages like C++, not web languages like JavaScript.

Bear in mind that some built-in browser functions are not part of the core JavaScript language — some are defined as part of browser APIs, which build on top of the default language to provide even more functionality (refer to this early section of our course for more descriptions). We'll look at using browser APIs in more detail in a later module.

Programmers call functions that are part of objects methods. You don't need to learn about the inner workings of structured JavaScript objects yet — you can wait until our later module that will teach you all about the inner workings of objects, and how to create your own. For now, we just wanted to clear up any possible confusion of method versus function — you are likely to meet both terms as you look at the available related resources across the Web.

The built-in code we've made use of so far come in both forms: functions and methods. You can check the full list of the built-in functions, as well as the built-in objects and their corresponding methods here.

You've also seen a lot of custom functions in the course so far — functions defined in your code, not inside the browser. Anytime you saw a custom name with parentheses straight after it, you were using a custom function. In our random-canvas-circles.html example (see also the full source code) from our loops article, we included a custom draw() function that looked like this:

This function draws 100 random circles inside a <canvas> element. Every time we want to do that, we can just invoke the function with this:

rather than having to write all that code out again every time we want to repeat it. And functions can contain whatever code you like — you can even call other functions from inside functions. The above function for example calls the random() function three times, which is defined by the following code:

You are probably clear on this by now, but just in case ... to actually use a function after it has been defined, you've got to run — or invoke — it. This is done by including the name of the function in the code somewhere, followed by parentheses.

You may see functions defined and invoked in slightly different ways. So far we have just created a function like so:

But you can also create a function that doesn't have a name:

The above example would require there to be a <button> element available on the page to select and click. You've already seen this structure a few times throughout the course, and you'll learn more about and see it in use in the next article.

You can also assign an anonymous function to be the value of a variable, for example:

This function could now be invoked using:

This effectively gives the function a name; you can also assign the function to be the value of multiple variables, for example:

This function could now be invoked using either of:

But this would just be confusing, so don't do it! When creating functions, it is better to just stick to this form:

You will mainly use anonymous functions to just run a load of code in response to an event firing — like a button being clicked — using an event handler. Again, this looks something like this:

Some functions require parameters to be specified when you are invoking them — these are values that need to be included inside the function parentheses, which it needs to do its job properly.

Note: Parameters are sometimes called arguments, properties, or even attributes.

As an example, the browser's built-in Math.random() function doesn't require any parameters. When called, it always returns a random number between 0 and 1:

Note: When you need to specify multiple parameters, they are separated by commas.

It should also be noted that sometimes parameters are optional — you don't have to specify them. If you don't, the function will generally adopt some kind of default behavior. As an example, the array join() function's parameter is optional:

If no parameter is included to specify a joining/delimiting character, a comma is used by default.

JavaScript is set up like this for various reasons — but mainly because of security and organization. Sometimes you don't want variables to be accessible from everywhere in the code — external scripts that you call in from elsewhere could start to mess with your code and cause problems because they happen to be using the same variable names as other parts of the code, causing conflicts. This might be done maliciously, or just by accident.

For example, say you have an HTML file that is calling in two external JavaScript files, and both of them have a variable and a function defined that use the same name:

Both functions you want to call are called greeting(), but you can only ever access the first.js file's greeting() function (the second one is ignored). In addition, attempting to declare the name variable a second time with the let keyword in the second.js file results in an error.

Note: You can see this example running live on GitHub (see also the source code).

Keeping parts of your code locked away in functions avoids such problems, and is considered the best practice.

It is a bit like a zoo. The lions, zebras, tigers, and penguins are kept in their own enclosures, and only have access to the things inside their enclosures — in the same manner as the function scopes. If they were able to get into other enclosures, problems would occur. At best, different animals would feel really uncomfortable inside unfamiliar habitats — a lion or tiger would feel terrible inside the penguins' watery, icy domain. At worst, the lions and tigers might try to eat the penguins! 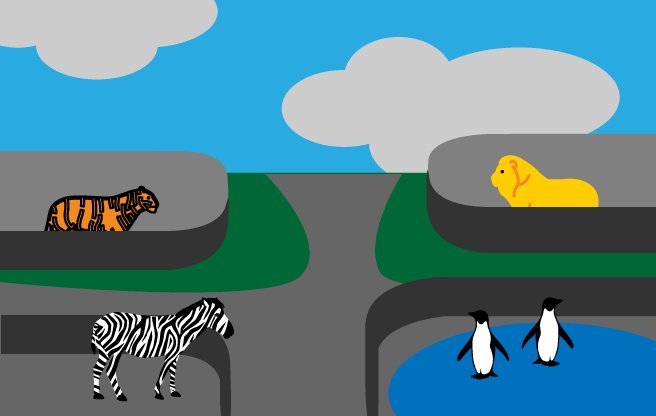 The zoo keeper is like the global scope — he or she has the keys to access every enclosure, to restock food, tend to sick animals, etc.

Let's look at a real example to demonstrate scoping.

Note: The ReferenceError: "x" is not defined error is one of the most common you'll encounter. If you get this error and you are sure that you have defined the variable in question, check what scope it is in.

Keep in mind that you can call a function from anywhere, even inside another function. This is often used as a way to keep code tidy — if you have a big complex function, it is easier to understand if you break it down into several sub-functions:

You've reached the end of this article, but can you remember the most important information? You can find some further tests to verify that you've retained this information before you move on — see Test your skills: Functions. These tests require skills that are covered in the next two articles, so you might want to read those first before trying it.

This article has explored the fundamental concepts behind functions, paving the way for the next one in which we get practical and take you through the steps to building up your own custom function.