In our first Ember article we will look at how Ember works and what it's useful for, install the Ember toolchain locally, create a sample app, and then do some initial setup to get it ready for development.

Ember is a component-service framework that focuses on the overall web application development experience, minimizing the trivial differences between applications — all while being a modern and light layer on top of native JavaScript. Ember also has immense backwards and forwards compatibility to help businesses stay up to date with the latest versions of Ember and latest community-driven conventions.

What does it mean to be a component-service framework? Components are individual bundles of behavior, style, and markup — much like what other frontend frameworks provide, such as React, Vue, and Angular. The service side provides long-lived shared state, behavior, and an interface to integrating with other libraries or systems. For example, the Router (which will be mentioned later in this tutorial) is a service. Components and Services make up the majority of any EmberJS application.

Generally, EmberJS works well for building apps that desire either or both of the following traits:

EmberJS has a plugin architecture, which means that add-ons can be installed and provide additional functionality without much, if any, configuration.

Ember can also be used with native mobile apps with a native-mobile bridge to JavaScript, such as that provided by Corber.

EmberJS is one of the most opinionated front-end frameworks out there. But what does it mean to be opinionated? In Ember, opinions are a set of conventions that help increase the efficiency of developers at the cost of having to learn those conventions. As conventions are defined and shared, the opinions that back those conventions help reduce the menial differences between apps — a common goal among all opinionated frameworks, across any language and ecosystem. Developers are then more easily able to switch between projects and applications without having to completely relearn the architecture, patterns, conventions, etc.

As you work through this series of tutorials, you'll notice Ember's opinions — such as strict naming conventions of component files.

How does Ember relate to vanilla JavaScript?

Ember is built on JavaScript technologies and is a thin layer on top of traditional object-oriented programming, while still allowing developers to utilize functional programming techniques.

The templating language is used to make build and runtime optimizations that otherwise wouldn't be possible. Most importantly, it is a superset of HTML — meaning that anyone who knows HTML can make meaningful contributions to any Ember project with minimal fear of breaking code. Designers and other non-developers can contribute to page templates without any knowledge of JavaScript, and interactivity can be added later.

This language also enables lighter asset payloads due to compiling the templates into a "byte code" that can be parsed faster than JavaScript. The Glimmer VM enables extremely fast DOM change tracking without the need to manage and diff a cached virtual representation (which is a common approach to mitigating the slow I/O of DOM changes).

For more information on the technical aspects of The Glimmer VM, the github repository has some documentation — specifically, References and Validators may be of interest.

Everything else in Ember is just JavaScript. In particular, JavaScript classes. This is where most of the "framework" parts come into play, as there are superclasses, where each type of thing has a different purpose and different expected location within your project.

Here is a demonstration the impact Ember has on the JavaScript that is in typical projects:
Gavin Demonstrates how < 20% of the JS written is specific to Ember. 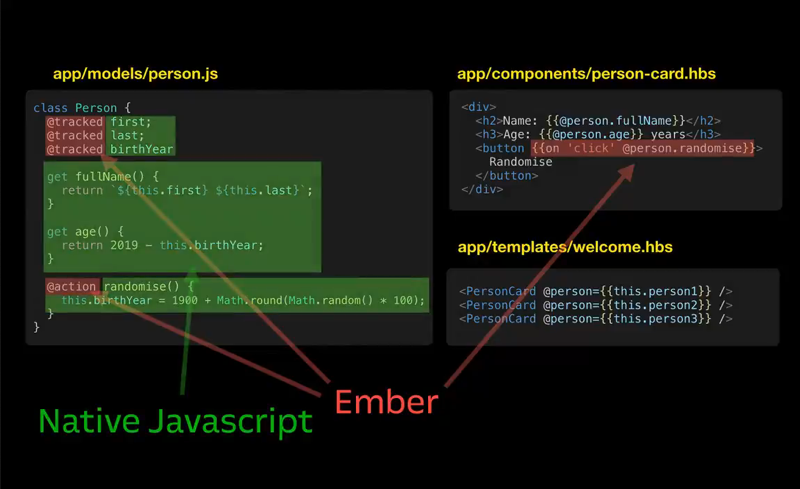 The rest of the Ember material you'll find here consists of a multi-part tutorial, in which we'll make a version of the classic TodoMVC sample app, teaching you how to use the essentials of the Ember framework along the way. TodoMVC is a basic to-do tracking app implemented in many different technologies.

Here is the completed Ember version, for reference.

A note on TodoMVC and accessibility

The TodoMVC project has a few issues in terms of adhering to accessible/default web practices. There are a couple of GitHub issues open about this on the TodoMVC family of projects:

Ember has a strong commitment to being accessible by default and there is an entire section of the Ember Guides on accessibility on what it means for website / app design.

That said, because this tutorial is a focus on the JavaScript side of making a small web application, TodoMVC's value comes from providing pre-made CSS and recommended HTML structure, which eliminates small differences between implementations, allowing for easier comparison. Later on in the tutorial, we'll focus on adding code to our application to fix some of TodoMVC's biggest faults.

Ember uses a command-line interface (CLI) tool for building and scaffolding parts of your application.

This generates a production-ready application development environment that includes the following features by default:

Getting ready to build our Ember project

You'll need a code editor before continuing to interact with your brand new project. If you don't have one configured already, The Ember Atlas has some guides on how to set up various editors.

Installing shared assets, as we're about to do, isn't normally a required step for new projects, but it allows us to use existing shared CSS so we don't need to try to guess at what CSS is needed to create the TodoMVC styles.

This CSS overrides some of the styles provided by the todomvc-app-css npm package, therefore allowing keyboard focus to be visible. This goes some way towards fixing one of the major accessibility disadvantages of the default TodoMVC app.

You may start the app in development mode by typing the following command in your terminal, while inside the todomvc directory:

This should give you an output similar to the following:

The development server launches at http://localhost:4200, which you can visit in your browser to check out what your work looks like so far.

If everything is working correctly, you should see a page like this: 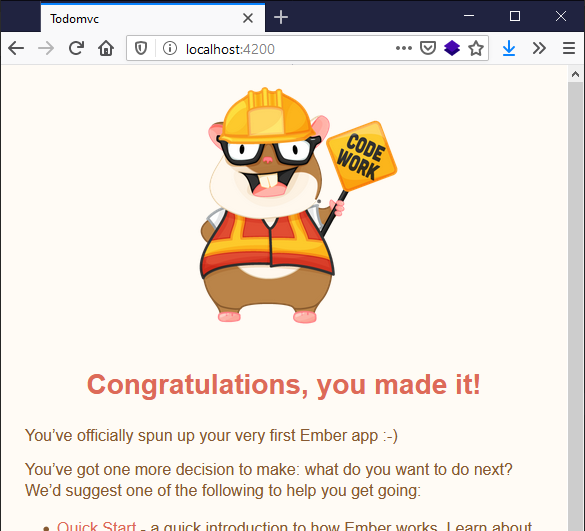 Note: on Windows systems without Windows Subsystem for Linux (WSL), you will experience slower build-times overall compared to macOS, Linux, and Windows with WSL.

So far so good. We've got to the point where we can start build up our sample TodoMVC app in Ember. In the next article we'll look at building up the markup structure of our app, as a group of logical components.