Prototypes are the mechanism by which JavaScript objects inherit features from one another. In this article, we explain how prototype chains work and look at how the prototype property can be used to add methods to existing constructors.

Note: This article covers traditional JavaScript constructors and classes. In the next article, we talk about the modern way of doing things, which provides easier syntax to achieve the same things — see ECMAScript 2015 classes.

JavaScript is often described as a prototype-based language — to provide inheritance, objects can have a prototype object, which acts as a template object that it inherits methods and properties from.

In JavaScript, a link is made between the object instance and its prototype (its __proto__ property, which is derived from the prototype property on the constructor), and the properties and methods are found by walking up the chain of prototypes.

Note: It's important to understand that there is a distinction between an object's prototype (available via Object.getPrototypeOf(obj), or via the deprecated __proto__ property) and the prototype property on constructor functions.

Let's look at an example to make this a bit clearer.

Here we'll go back to the example in which we finished writing our Person() constructor — load the example in your browser. You can use our oojs-class-further-exercises.html example (see also the source code), if you don't already have it from working through the last article.

In this example, we have defined a constructor function, like so:

We have then created an object instance like this:

If you type "person1." into your JavaScript console, you should see the browser try to auto-complete this with the member names available on this object: 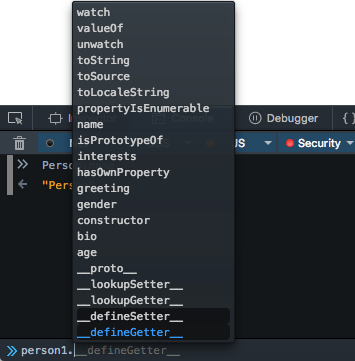 What happens if you call a method on person1, which is actually defined on Object.prototype? For example:

valueOf() returns the value of the object it is called on. In this case, what happens is:

Note: We want to reiterate that the methods and properties are not copied from one object to another in the prototype chain. They are accessed by walking up the chain as described above.

Note: Before ECMAScript 2015, there wasn't officially a way to access an object's prototype directly — the "links" between the items in the chain are defined in an internal property, referred to as [[prototype]] in the specification for the JavaScript language (see ECMAScript).

Most modern browsers, however, do offer property available called __proto__ (that's 2 underscores either side), which contains the object's constructor's prototype object. For example, try person1.__proto__ and person1.__proto__.__proto__ to see what the chain looks like in code!

Since ECMAScript 2015, you can access an object's prototype object indirectly via Object.getPrototypeOf(obj).

The prototype property: Where inherited members are defined

Object.is(), Object.keys(), and other members not defined inside the prototype bucket are not inherited by object instances or object types that inherit from Object.prototype. They are methods/properties available just on the Object() constructor itself.

Note: This seems strange — how can you have a method defined on a constructor, which is itself a function?

Well, a function is also a type of object. See the Function() constructor reference if you don't believe us.

You'll see a large number of methods defined on Object's prototype property, which are then available on objects that inherit from Object, as shown earlier.

You'll see other examples of prototype chain inheritance all over JavaScript — try looking for the methods and properties defined on the prototype of the String, Date, Number, and Array global objects, for example. These all have a number of members defined on their prototype, which is why for example when you create a string, like this:

myString immediately has a number of useful methods available on it, like split(), indexOf(), replace(), etc.

Note: It is worth reading our more in-depth guide to "Using prototypes in JavaScript", once you've made sense of this section and wish to know more. This section is intentionally simplified to make these concepts a little easier to understand when you first meet them.

Important: The prototype property is one of the most confusingly-named parts of JavaScript — you might think that this points to the prototype object of the current object, but it doesn't (that's an internal object that can be accessed by __proto__, remember?). prototype instead is a property containing an object on which you define members that you want to be inherited.

Earlier on we showed how the Object.create() method can be used to create a new object instance.

This will return the person1 object.

This works well. You won't need to use it often, but it can be really useful when you want to create a new instance and don't have a reference to the original constructor easily available for some reason.

The constructor property has other uses. For example, if you have an object instance and you want to return the name of the constructor it is an instance of, you can use the following:

Try this, for example:

Note: The value of constructor.name can change (due to prototypical inheritance, binding, preprocessors, transpilers, etc.). Therefore, for more complex examples, you'll want to use the instanceof operator instead.

Let's have a look at an example of modifying the prototype property of a constructor function — methods added to the prototype are then available on all object instances created from the constructor. At this point we'll finally add something to our Person() constructor's prototype.

You should get an alert message displayed, featuring the person's name as defined inside the constructor. This is really useful, but what is even more useful is that the whole inheritance chain has updated dynamically, automatically making this new method available on all object instances derived from the constructor.

Note: If you are having trouble getting this example to work, have a look at our oojs-class-prototype.html example (see it running live also).

You will rarely see properties defined on the prototype property, because they are not very flexible when defined like this. For example you could add a property like so:

This isn't very flexible, as the person might not be called that. It'd be much better to build the fullName out of name.first and name.last:

However, this doesn't work. That's because this will be referencing the global scope in this case, not the function scope. Calling this property would return undefined. This worked fine on the method we defined earlier in the prototype because it is sitting inside a function scope, which will be transferred successfully to the object instance scope. So you might define constant properties on the prototype (i.e. ones that never need to change), but generally it works better to define properties inside the constructor.

This pattern can be seen in action in Piotr Zalewa's school plan app example.

You've reached the end of this article, but can you remember the most important information? You can find some further tests to verify that you've retained this information before you move on — see Test your skills: Object-oriented JavaScript.

Note that this set of tests relies on some of the knowledge taught in the next article, so you might want to read that first before you try them.

This article has covered JavaScript object prototypes, including how prototype object chains allow objects to inherit features from one another, the prototype property and how it can be used to add methods to constructors, and other related topics.

In the next article we'll look at how you can implement inheritance of functionality between two of your own custom objects.