In the previous article we learning about Svelte's TypeScript support, and how to use it to make your application more robust. In this final article we will look at how to deploy your application and get it online, and also share some of the resources that you should go on to, to continue your Svelte learning journey.

Note that our application is fully functional and porting it to TypeScript is completely optional. There are different opinions about it, and in this chapter we will talk briefly about the pros and cons of using TypeScript. Even if you are not planning to adopt it, this article will be useful for allowing you to learn what it has to offer and help you make your own decision. If you are not interested at all in TypeScript, you can skip to the next chapter, where we will look at different options for deploying our Svelte applications, further resources, and more.

Code along with us

Clone the github repo (if you haven't already done it) with:

Then to get to the current app state, run

So far we've been running our app in development mode with npm run dev. As we saw earlier, this instruction tells Svelte to compile our components and JavaScript files into a public/build/bundle.js file and all the CSS sections of our components into public/build/bundle.css. It also starts a development server and watches for changes, recompiling the app and refreshing the page when a change occurs.

Your generated bundle.js and bundle.css files will be something like this (file size on the left):

To compile our application for production we have to run npm run build instead. In this case, Svelte won't lunch a web server or keep watching for changes. It will however minify and compress our JavaScript files using terser.

So, after running npm run build, our generated bundle.js and bundle.css files will be more like this:

Try running npm run build in your app's root directory now. You might get a warning, but you can ignore this for now.

Our whole app is now just 21 KB — 8.3 KB when gzipped. There are no additional runtimes or dependencies to download, parse, execute, and keep running in memory. Svelte analyzed our components and compiled the code to vanilla JavaScript.

A look behind the Svelte compilation process

By default, when you create a new app with npx degit sveltejs/template my-svelte-project, Svelte will use rollup as the module bundler.

Note: There is also an official template for using webpack and also many community-maintained plugins for other bundlers.

In the file package.json you can see that the dev and start scripts are just calling rollup:

In the dev script we are passing the -w argument, which tells rollup to watch files and rebuild on changes.

If we have a look at the rollup.config.js file, we can see that the Svelte compiler is just a rollup plugin:

Later on in the same file you'll also see how rollup minimizes our scripts in production mode and launches a local server in development mode:

There are many plugins for rollup that allow you to customize its behavior. A particularly useful plugin which is also maintained by the Svelte team is svelte-preprocess, which pre-processes many different languages in Svelte files such as PostCSS, SCSS, Less, CoffeeScript, SASS, and TypeScript.

From the point of view of a web server, a Svelte application is nothing more than a bunch of HTML, CSS, and JavaScript files. All you need is a web server capable of serving static files, which means you have plenty of options to choose from. Let's look at a couple of examples.

Note: the following section could be applied to any client-side static web site requiring a build step, not just Svelte apps.

One of the easiest ways to deploy a Svelte application is using Vercel. Vercel is a cloud platform specifically tailored for static sites, which has out-of-the-box support for most common front-end tools, Svelte being one of them.

You can also import a Svelte git project into Vercel from GitHub, GitLab, or BitBucket.

Note: you can globally install Vercel with npm i -g vercel so you don't have to use npx to run it.

For hosting static files there are several online services that allow you to automatically deploy your site whenever you push changes to a git repository. Most of them involve setting up a deployment pipeline that gets triggered on every git push, and takes care of building and deploying your web site.

To demonstrate this, we will deploy our todos app to GitLab Pages.

GitLab uses a built-in tool called GitLab CI/CD to build your site and publish it to the GitLab Pages server. The sequence of scripts that GitLab CI/CD runs to accomplish this task is created from a file named .gitlab-ci.yml, which you can create and modify at will. A specific job called pages in the configuration file will make GitLab aware that you are deploying a GitLab Pages website.

Let's have a go at doing this now.

Whenever there's a job running GitLab will display an icon showing the process of the job. Clicking on it will let you inspect the output of the job.

You can also check the progress of the current and previous jobs from the CI / CD > Jobs menu option of your GitLab project. 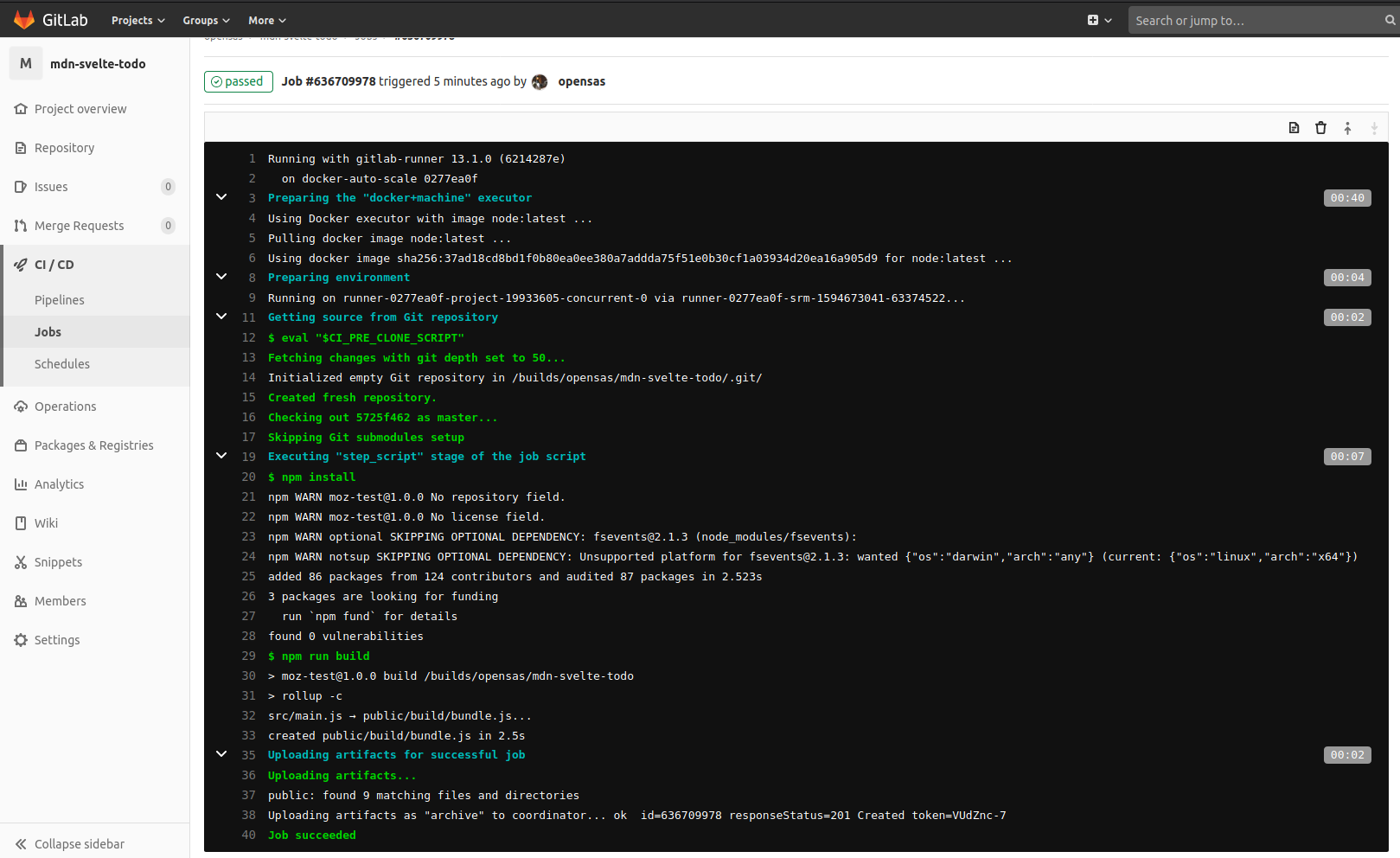 With this configuration, whenever you push changes to the GitLab repo, the application will be automatically rebuilt and deployed to GitLab Pages.

In this section we'll give you some resources and projects to go and check out, to take your Svelte learning further.

To go further and learn more about Svelte, you should definitely visit the Svelte homepage. There you'll find many articles explaining Svelte's philosophy. If you haven't already done it, make sure you go through the Svelte interactive tutorial. We already covered most of its content, so it won't take you much time to complete it — you should consider it as practise!

You can also consult the Svelte API docs and the available examples.

To understand the motivations behind Svelte, you should read Rich Harris's Rethinking reactivity presentation on YouTube. He is the creator of Svelte, so he has a couple of things to say about it. You also have the interactive slides available here which are, unsurprisingly, built with Svelte. If you liked it, you will also enjoy The Return of 'Write Less, Do More' presentation, which Rich Harris gave at JSCAMP 2019.

There are other projects related to Svelte that are worth checking out:

Interacting with the community

There are a number of different ways to get support and interact with the Svelte community:

Congratulations! You have completed the Svelte tutorial. In the previous articles we went from zero knowledge about Svelte to building and deploying a complete application.

In this article we've learned about a couple of zero-fuss options to deploy our app in production and seen how to setup a basic pipeline to deploy our app to GitLab on every commit. Then we provided you with a list of Svelte resources to go further with your Svelte learning.

Congratulations! After completing this series of tutorials you should have a strong base from which to start developing professional web applications with Svelte.