In the last article we started developing our Todo list app. The central objective of this article is to look at how to break our app into manageable components and share information between them. We'll componentize our app, then add more functionality to allow users to update existing components.

Code along with us

Clone the github repo (if you haven't already done it) with:

Then to get to the current app state, run

To code along with us using the REPL, start at

Breaking the app into components

In Svelte, an application is composed from one or more components. A component is a reusable, self-contained block of code that encapsulates HTML, CSS and JavaScript that belong together, written into a .svelte file. Components can be big or small, but they are usually clearly defined: the most effective components serve a single, obvious purpose.

The benefits of defining components are comparable to the more general best practice of organizing your code into manageable pieces. It will help you understand how they relate to each other, it will promote reuse, and it will make your code easier to reason about, maintain, and extend.

But how do you know what should be split into its own component?

There are no hard rules for this. Some people prefer an intuitive approach and start looking at the markup and drawing boxes around every component and subcomponent that seems to have its own logic.

Other people apply the same techniques used for deciding if you should create a new function or object. One such technique is the single responsibility principle — that is, a component should ideally only do one thing. If it ends up growing, it should be split into smaller subcomponents.

Both approaches should complement each other, and help you decide how to better organize your components.

Eventually, we will split up our app into the following components: 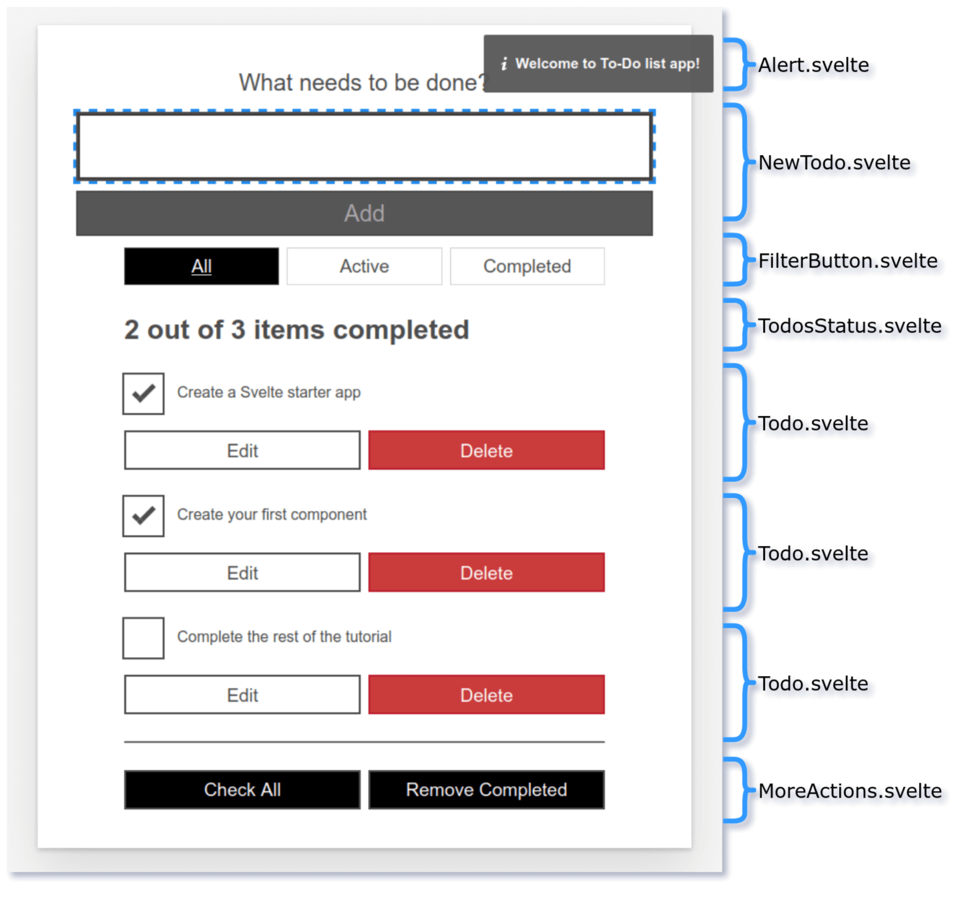 In this article we will concentrate on creating the FilterButton and Todo components; we'll get to the others in future articles.

Note: In the process of creating our first couple of components, we will also learn different techniques to communicate between components, and the pros and cons of each.

We'll begin by creating our FilterButton.svelte.

Note: Remember that when the HTML attribute name and variable matches, they can be replaced with {variable}, that's why we could replace <FilterButton filter={filter} /> with <FilterButton {filter} />.

So far so good! Let's try out the app now. You'll notice that when you click on the filter buttons, they are selected and the style updates appropriately. But! We have a problem — the todos aren't filtered. That's because the filter variable flows down from the Todos component to the FilterButton component through the prop, but changes occurring in the FilterButton component don't flow back up to its parent — the data binding is one-way by default. Let's look at a way to solve this.

Sharing data between components: passing a handler as a prop

One way to let child components notify their parents of any changes is to pass a handler as a prop. The child component will execute the handler, passing the needed information as a parameter, and the handler will modify the parent's state.

In our case, the FilterButton component will receive an onclick handler from its parent. Whenever the user clicks on any filter button, the child will call the onclick handler, passing the selected filter as a parameter, back up to its parent.

We will just declare the onclick prop assigning a dummy handler to prevent errors, like this:

And we'll declare the following reactive statement — $: onclick(filter) — to call the onclick handler whenever the filter variable is updated.

When any filter button is clicked, we just update the filter variable with the new filter. Now our FilterButton component will work again.

In the previous example we realized that our FilterButton component wasn't working because our application state was flowing down from parent to child through the filter prop — but it wasn't going back up. So we added an onclick prop to let the child component communicate the new filter value to its parent.

It works ok, but Svelte provides us an easier and more straightforward way to achieve two-way data binding. Data ordinarily flows down from parent to child using props. If we want it to also flow the other way — from child to parent — we can use the bind: directive.

Now we will create a Todo component to encapsulate each individual todo — including the checkbox and some editing logic so you can change an existing todo.

Our Todo component will receive a single todo object as a prop. Let's declare the todo prop and move the code from the Todos component. Just for now, we'll replace the call to removeTodo with an alert. We'll add that functionality back in later on.

The list of todos is displayed on the page, and the checkboxes should work (try checking/unchecking a couple, and then observing that the filters still work as expected), but our "x out of y items completed" status heading will no longer update accordingly. That's because our Todo component is receiving the todo via the prop, but it's not sending any information back to its parent. We'll fix this later on.

The bind directive is pretty straightforward and allows you to share data between a parent and child component with minimal fuss. However, when your application grows larger and more complex it can easily get difficult to keep track of all your bound values. A different approach is the "props-down, events-up" communication pattern.

Basically, this pattern relies on child components receiving data from their parents via props and parent components updating their state by handling events emitted from child components. So props flow down from parent to child and events bubble up from child to parent. This pattern establishes a two-way flow of information, which is predictable and easier to reason about.

Let's look at how to emit our own events to re-implement the missing Delete button functionality.

To create custom events we'll use the createEventDispatcher utility. This will return a dispatch() function that will allow us to emit custom events. When you dispatch an event you have to pass the name of the event and, optionally, an object with additional information that you want to pass to every listener. This additional data will be available on the detail property of the event object.

Note: Custom events in Svelte share the same API as regular DOM events. Moreover, you can bubble up an event to your parent component by specifying on:event without any handler.

We'll edit our Todo component to emit a remove event, passing the todo being removed as additional information.

Now we'll take care of the update event, so that our parent component can get notified of any modified todo.

Now we need to update our Todo component's markup to call the above functions when the appropriate actions are taken.

To achieve this we will use an if block. The if block conditionally renders some markup. Take into account that it won't just show or hide the markup based on the condition — it will dynamically add and remove the elements from the DOM, depending on the condition.

When editing is true, for example, Svelte will show the update form; when it's false, it will remove it from the DOM and add in the checkbox. Thanks to Svelte reactivity, assigning the value of the editing variable will be enough to display the correct HTML elements.

The following gives you an idea of what the basic if block structure looks like:

The non-editing section — that is, the {:else} part (lower half) of the if block — will be very similar to the one we had in our Todos component. The only difference is that we are calling onToggle(), onEdit(), and onRemove(), depending on the user action.

It is worth noting that:

The editing UI (the upper half) will contain an <input> field and two buttons to cancel or save the changes:

The <input>'s value property will be bound to the name variable, and the buttons to cancel and save the changes call onCancel() and onSave() respectively (we added those functions earlier):

We also disable the Save button when the <input> is empty, using the disabled={!name} attribute, and allow the user to cancel the edit using the Escape key, like this:

We also use todo.id to create unique ids for the new input controls and labels.

As you can see, it's easy to implement the "props-down, events-up" pattern in Svelte. Nevertheless, for simple components bind can be a good choice; Svelte will let you choose.

Note: Svelte provides more advanced mechanisms to share information among components: the Context API and Stores. The Context API provides a mechanism for a components and their descendants to "talk" to each other without passing around data and functions as props, or dispatching lots of events. Stores allows you to share reactive data among components that are not hierarchically related. We will look at Stores later on in the series.

The code so far

To see the state of the code as it should be at the end of this article, access your copy of our repo like this:

To see the current state of the code in a REPL, visit:

Now we have all of our app's required functionality in place. We can display, add, edit and delete todos, mark them as completed, and filter by status.

In this article, we covered the following topics:

In the next article we will continue componentizing our app and look at some advanced techniques for working with the DOM.